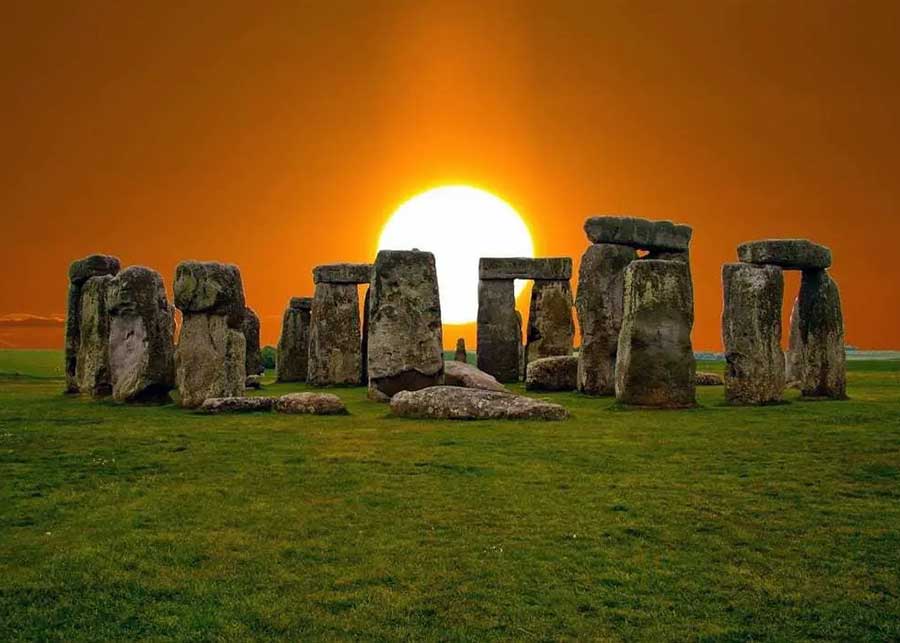 This paper describes a sacred triangle in a landscape of prehistoric England that was constructed around 2400 BC. The triangle consists of three henges: Stonehenge, Woodhenge and Bluestonehenge. In form, it is a right isosceles triangle lined in respect to E-W and N-S lines.

This paper approaches the most well-known sacred landscape structure of prehistoric England with the background of the recent research of analogue structures of pre-Christian Slavs. The ancient Slavs positioned their sacred sites in a tripartite structures (Pleterski 1996) that were related to the central Slavic myth of a divine battle between a thunder god and his underworld opponent (Katičić 2003-2011). A substantial number of sacred triangles has already been described in Croatia, Slovenia, Austria and Germany (Pleterski 1996; Belaj 2007, Đermek 2010). These triangles probably give enough evidence to support the claim that the ancient Slavs positioned their sacred sites in a way that the angles between lines connecting pairs of sites have astronomical significance (usually refer the zenith and azimuth angles which the sun takes through the annual cycle). Very often in the observed triangles among some of the sides appears the ratio of 1:√2. There exist some indications that the distances between sacred sites were also important. They might have been measured using the projections of right isosceles triangles on the horizontal plane (Đermek 2012, 2013).

The assumption is that the sacred landscape structures of prehistoric England are comparable to their counterparts among prehistoric Slavs despite a huge difference in timespan. The Stonehenge World Heritage site was created by UNESCO in 1986. English archaeologists recently started to examine Stonehenge and surrounding landscape as a whole: “Only later did the more complex concentric architecture of the Southern Circle and Woodhenge develop, at a time when the former came to be physically linked to Stonehenge in a new and grand design that drew the entire landscape together” (Parker Pearson et al. 2008, p. 164). Professor Parker Pearson conjectured in his book that Stonehenge, Durrington Walls with nearby Woodhenge and Bluestonehenge form a funerary complex or landscape in which human remains made a literal and metaphorical journey from the land of the living in the Durrington Walls area to the land of the dead along a funerary processional route from the River Avon into Stonehenge for burial (Parker Pearson 2012).

An important finding in 2008 and 2009 has allowed progress in understanding the whole landscape structure. It was a discovery of a prehistoric henge and stone circle monument by the Stonehenge Riverside Project south-east of Stonehenge, very close to the River Avon (Parker Pearson et al. 2010).[1] The monument was named Bluestonehenge. Its outer henge is about 25 m in diameter and was built around 2400 BC.[2] The stone circle which is just less than 10 m in diameter was built around 3400–2500 BC.[3] Nine stone holes were identified, part of a circle of about 25 standing stones[1], which now are missing. The imprints of the stones’ bases and the shapes of the sockets indicate that these match with the dimensions of the bluestones in the inner oval at Stonehenge. The first phase of Stonehenge is the outermost ring consisting of 56 Aubrey Holes. It is suggested that those holes originally held bluestones, which were moved to the centre of Stonehenge comprising about 80 stones around 2500 BC.The extra 24 stones could be the missing stones from Bluestonehenge.[2] Bluestonehenge is linked to Stonehenge itself by “the Stonehenge Avenue”, which was dug around 2400 BC[3], probably simultaneously with the outer Bluestonehenge henge. From Stonehenge’s northeast entrance, the Stonehenge Avenue leads towards the direction of midsummer sunrise for about 500 m, before turning towards the river Avon, where it reaches Bluestonehenge. The avenue consists of two parallel ditches, about 20 m apart, with banks on both sides. The first 500 m of the avenue ditches stretches alongside a pair of natural chalk ridges whose azimuth is about 50°. It looks as if the builders had positioned Stonehenge onto the end of a natural phenomenon, which is coincidental with the midwinter sunset in one direction and the midsummer sunrise in the other.

The third prehistoric henge that is situated north-east of Stonehenge was discovered 1925 and was named Woodhenge. It is a monument of similar size to Stonehenge, originally made up of a series of concentric circles of wooden posts within a circular bank and ditch. The ditch has been dated to between 2400 and 2000 BC,[4] but the construction of the timber monument was probably earlier[5] (Pollard 2012, p.101). The site consists of six concentric oval rings of postholes, the outermost being about 40 meters wide. They are surrounded by a single flat-bottomed ditch, and by an outer bank. The site had a single entrance from the north-northeast.

It could be surmised that all three mentioned henges very probably were contemporary, at least some period around 2400 BC. Thus, we are justified in proposed a deliberate spatial relationship between Stonehenge, Woodhenge and Bluestonehenge. I do not know whether the English archaeologists noticed that these three locations form a right isosceles triangle (Fig. 1 & Fig. 2).[6789]

Judging from some excavation results and interpretations of the English archaeologists,[11] the sanctuary at Woodhenge probably was understood to be located in the world of the living, while the sanctuary at Stonehenge was understood to be located in the imaginary world of the dead. The sanctuary at Bluestonehenge which is very close to the river held symbolic balance between these two worlds as indicated by its position at the vertex which joins the two equal legs of a right isosceles triangle. 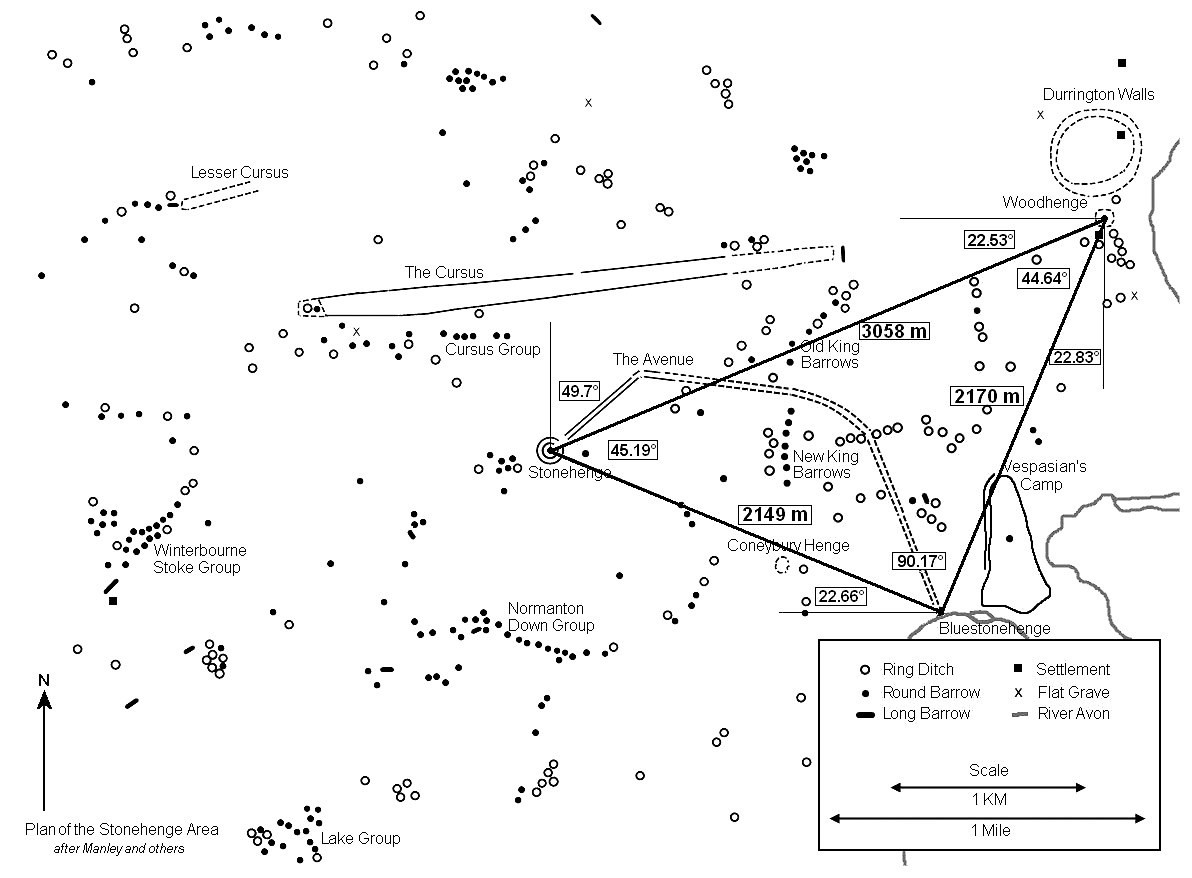 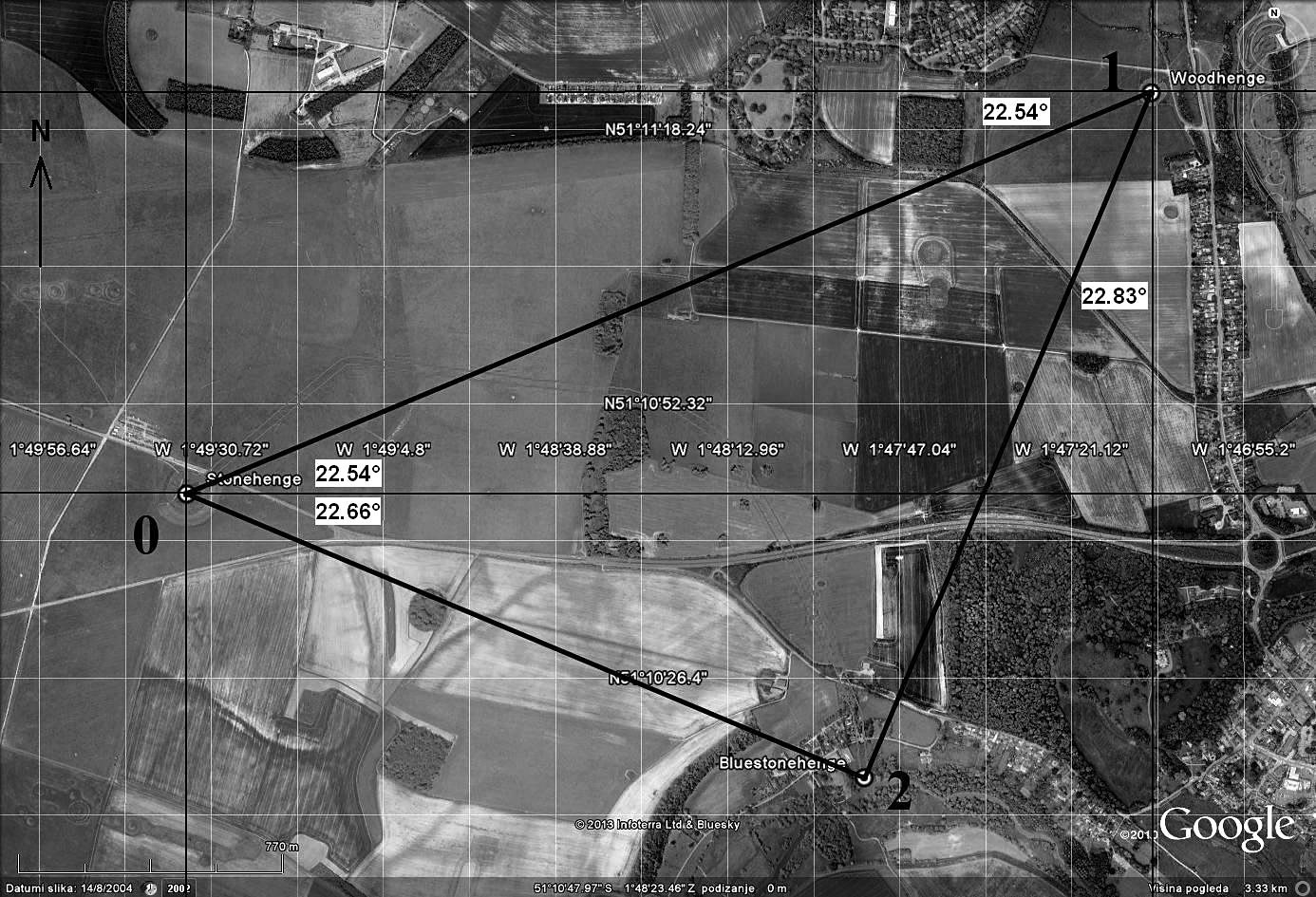 Figure 2: Stonehenge triangle superposed on the Google Earth Satellite Map (0: Stonehenge; 1: Woodhenge; 2: Bluestonehenge; Grey lines: ditches of the Avenue and of the henges Visualization of the ditches is done with the help of Google Earth layers prepared by the Archaeology Group at Bournemouth University http://download.bournemouth.ac.uk/apsci/srp/Seeing-Beneath-Stonehenge.kmz 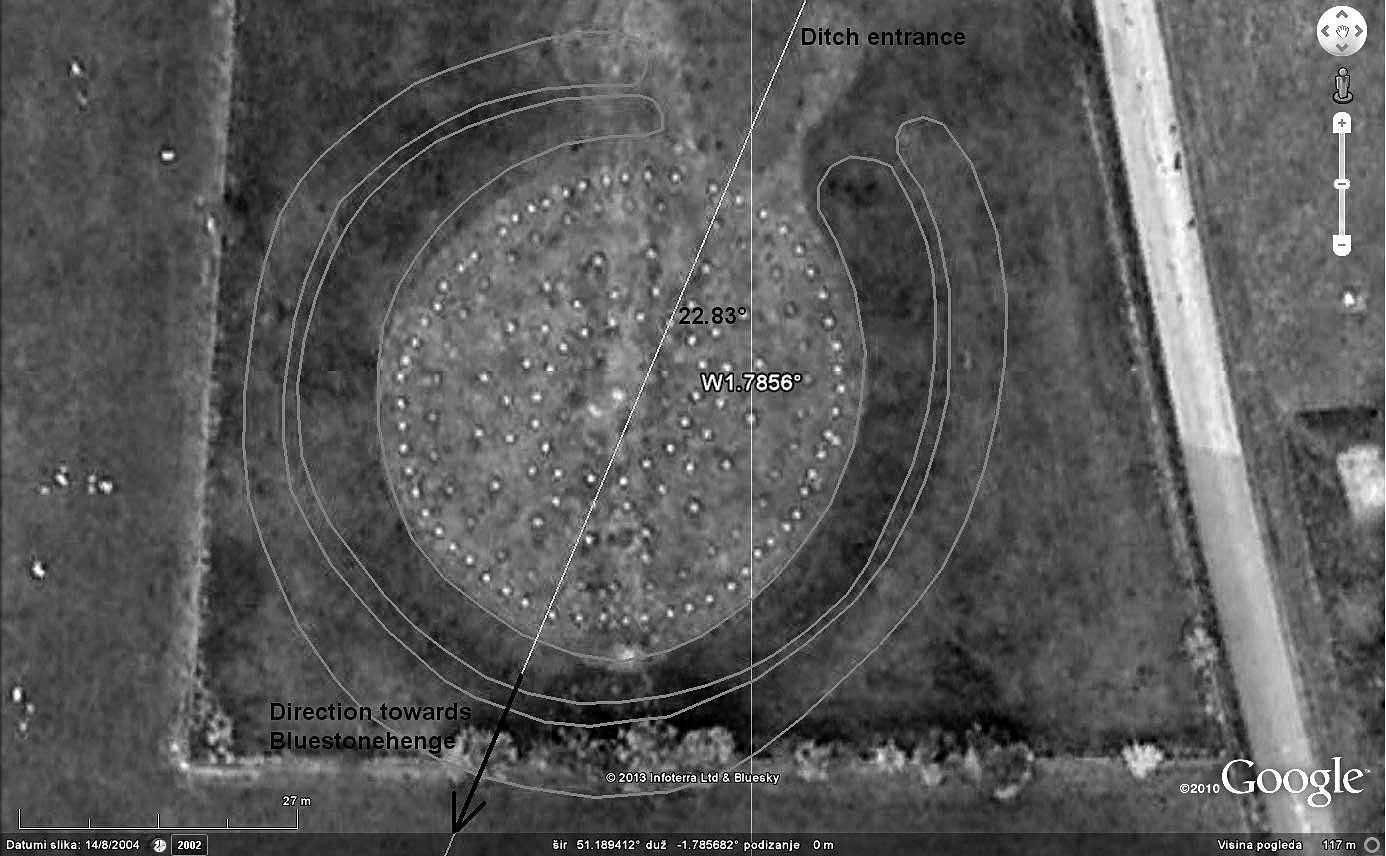 Figure 3: Woodhenge and the line Bluestonehenge-Woodhenge superposed on the Google Earth Satellite Map. Visualization of the Woodhenge ditch is done with the help of Google Earth layers prepared by the Archaeology Group at Bournemouth University